America is important to you.

It's important to us too. 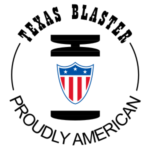 Texas Blaster is a field proven, tough, industrially equipped media blaster. It was built to handle mobile equipment blasting in the fields of rural Texas, and can handle any blasting project you can throw at it. Not convinced? Read customer reviews: HERE. Find out more about the Texas Blaster: HERE.

Buy an Original Texas Blaster for less than $1000 or order our most popular package - the Texas Blaster Ultimate Unit. Everything you need in one place. Just add air.

America has changed since the inception of Texas Blaster 55+ years ago. We've seen lots of American Brands and American Jobs outsourced over seas.

In a market flooded with imported media blasters, Texas Blaster has worked hard to make sure there is an American Tough blaster.

So just how much of Texas Blaster is made in America?

The tanks and all of the other components that require custom fabrication, as well as, all the assembly processes are done at our facility here in Rockport, Texas. The bulk of our "off the shelf" parts used on the Texas Blaster are ordered from American suppliers, though they may include foreign made components. By using many standard fittings, if in the rare event a part fails, replacements can be found at hardware stores anywhere.

Texas Blaster believes in American made products by American made hands.  Even though we are currently looking for a new vendor, our previous hoods were hand sewn by a seamstress in Paris, Ohio.  The powder coated finish is provided by a family owned business in San Antonio, Texas.

Quality and value are the governing factors in the construction of Texas Blasters. We choose components that last and hold up to everyday use, and we use our own Blaster, so we know.

We are an American family running a "Mom and Pop" operation. We have sold 1000's of these units over our 55 plus year history. Our longevity is our commitment to a quality product. Many companies falsely claim to be 100% Made in America. It helps boost sales and build a false confidence in their products. That's their choice. We at Texas Blaster believe truth and honesty should prevail, even if it cost us a few customers.

So know that when you buy a Texas Blaster; you are supporting American families. 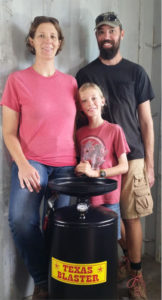